Carelessly discarded plastic bottles transform into valuable bricks if Andreas Froese and his companions get hold of them. They build remarkable houses from pre-used PET-bottles. PET bottles are a major waste problem in developing countries; when filled with sand they can be used as bricks instead. Andreas Froese, a skilled carpenter from Westphalia, Germany, has invented the technique and thus prevents tens of thousands of empty bottles from polluting beaches, rivers and oceans or burden landfills. 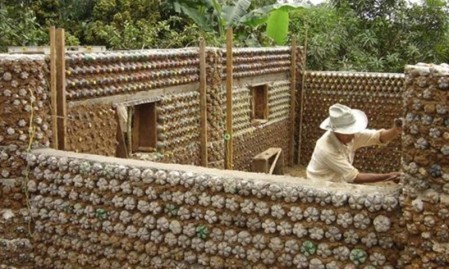 Producing the building material takes a lot of time and requires many helpers, but it is completely free of charge

The idea for this came to him while creating an ecological recreation park in Tegucigalpa, the Honduran Capital. After a big party with ten thousands of participants he was faced with their leftovers: polyethylene terephthalate (PET). Ten thousands of empty PET bottles were lying around everywhere. And that not only here. Everywhere in the country. In any third world country.

The problem is solved when PET bottles are filled with sand, rubble and soil. When the bottles are filled and have become heavy they are stacked, joined with an old nylon string or steel wire from the rubbish tip and then walled up with clay or mortar. Walls and windows are created, built round posts made of bottles go in the corners, and a tin roof goes on top. Eventually the whole thing gets rendered with clay and painted. Then, the new house made from old bottles is finished. The huge benefit of this process: The building material for the walls is for free! You only need a lot of peoples help. Especially the filling of the bottles takes a lot of time.

Andreas Froese is of the opinion that the poor people in third world countries primarily need food, a roof above their head and schools. The consequence for the skilled carpenter was: I do not want to build for the rich, but for those who have to reside in a shed with their families, exposed to rainfall, storms, earthquake and bullets. 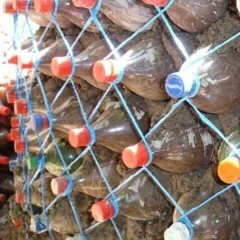 Andreas Froese already built his PET bottle houses in Columbia, Bolivia, Guatemala, Uganda and India. In places where his houses stand, the idea is setting roots and spreads out. "A boy who helped me build a house in Bolivia became a bricklayer two years later", Froese proudly says.

With local means, with locally available building supplies creating something valuable for the local community. This is a picture-perfect example of what we mean, when we say "Intelligent Recycling". By the way we learned from press articles that Froeses houses cost the constructor only around 3.000 Euros. For poor people still hard to attain; for an engaged community in Europe or a financially strong donor though an affordable amount of money.

Here are the links to Froese's Spanish website and to a Youtube video, which documents the "Casa de la Fe" project in Honduras, in which disabled and non-disabled people jointly built a PET bottle house. We are deeply impressed! 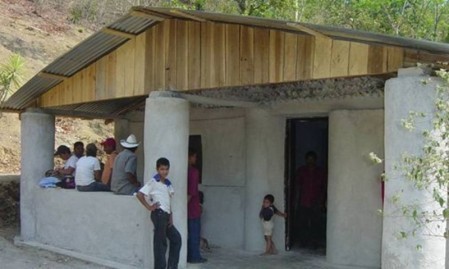 Rendered and with a roof, the bottle house can hardly be distinguished from normal houses

COPLARE on Waste and Plastics in Oceania

The article vividly reports about our findings during the crossing of Oceania and leads to the conclusion that we are faced with societies and communities which, due to their resources, their geological conditions, their economic performance, their education and culture, are in all probability not able to handle the waste issue before waste piles destroy the last paradises on earth.

With this article, COPLARE hopes to contribute its share so that the public discussion is steered to the topic of waste management and that the shortcomings in the current practices are identified. We will only be able to attain more recycling as soon as the homework regarding waste management is done. This is what we learned by the crossing of Oceania!