Protection of the Marine Environment: Plastic – a Ticking Time Bomb in the Sea!

Garbage in the sea is not a new phenomenon. Haven't you ever been on holiday and got upset about a beach that did not look clean and inviting, where you could not even find a decent place to put your beach towel? This is why we generally go to beaches which are cleaned daily. 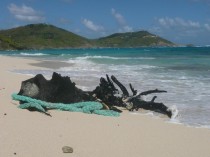 One finds all sorts of things on wild beaches too: bits of dead plants, seaweed, a dead crab – this is part of the cycle of nature. Even a stray piece of rope or fishing net can seem romantic, as you wonder what ship it could have come from or how it came to be on that particular beach. But when it comes to old glass bottles, half-decayed cans, filthy foamed polystyrene packaging, bottle caps, old lighters, plastic bottles, plastic crates, old flip-flops and sandals, and variously tattered sheets of plastic we find it revolting and turn away in disgust. Environmentalists are, in fact, concerned about ghost nets and fishing line adrift in the sea because coastal birds use them as lethal nest material; waste from fishing boats makes up ten percent of global marine litter.

For a long time, nobody noticed that the unimaginable amounts of garbage floating in the oceans had collected together in a gigantic mass. Year after year, pieces of plastic and their degradation products accumulate in oceanic whirlpools and become considerably condensed in some sea regions. The largest one, discovered in 1997, became known as the "Great Pacific Garbage Patch". Its extent was compared to the size of Texas or Central Europe. The idea of a highly visible carpet of waste, however, does not correspond to reality. The reality is that accumulations of plastic in the oceans, unlike flotsam containing plastic, are not that visible at all. They consist of high concentrations of plastic fragments that float just under the surface of the water. It takes up to 450 years for plastic to degrade completely. In the meantime, it is breaking down into smaller and smaller particles, some of which are only visible through a microscope.

So what exactly is the threat posed by plastic in its various stages of decay?

Plastic floating in the sea has harmful effects at each stage of its degradation process. We describe the individual stages below, progressing from the still more or less intact larger pieces of plastic to micro-fragments. Plastic bags floating in the water, like the one pictured on our home page, for example, are mistaken by turtles for jellyfish, which form part of their diet. The turtles eat the supposed jellyfish and die a painful death as a result. The plastics rings used to package six-packs also present a problem. Dead seabirds have been found with these rings around their necks. The birds are dead, but the plastic rings are here to stay. Floating plastic sheeting can also mean major disaster for motor-driven smaller ships if the plastic gets into in the propeller or clogs the solenoid valve. Either can lead to the ship being without thrust in unfavourable weather conditions and being in distress at sea. 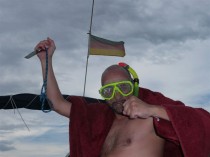 We ourselves got a piece of plastic sheeting stuck in the propeller of a cruiser in Croatia this summer. The situation was not dangerous because although we were far from land the water was calm enough to weigh anchor. Armed with diving goggles, snorkel and a knife, a member of the crew had to dive under the hull, often in strong currents, to free the propeller of the plastic. A tough job!

Biologists are finding small- and medium-sized pieces of plastic in ever greater quantities in the stomachs of dead seabirds. Obviously birds also mistake plastic for food. The effects are the same as those on turtles. The animals become incredibly weak or starve, with their stomachs full of plastic. They also feed the plastic garbage to their young who are doomed to the same fate. The images of albatross and fulmars that have died in this way are a gruesome sight and should make us think.

Small plastic particles are similar in size, appearance and buoyancy to plankton and mingle with them. Plankton forms the basis of the marine food chain. Countless creatures feed on them, from small sandworms and fish to blue whales and the fascinating whale sharks. Although they feed primarily on plankton, whale sharks are up to 14 metres long and weigh as much as 12 tonnes. What will happen to these giants of the sea when there is no more real plankton but only plastic left for them to eat? Will the males still cover great distances as has always been their habit, and will the females still give birth to the same number of young? The logical answer springs to mind: probably not.

There is, however, one more much more serious problem: Plastic as a toxic sponge!

Water-insoluble toxic substances such as DDT and PCBs bind in water to the surfaces of the floating garbage patches. Japanese scientists have proven that plastic particles have a concentration of these pollutants one million times greater than the surrounding sea water.

Marine life which confuses this plastic with food and consumes it increase the amount of environmental toxins in their bodies. Humans and top predators such as tuna, sharks or marine mammals at the top of the food chain receive the highest dose of these pollutants. Although they have been banned substances for many years, DDT and PCBS continue – and will continue in the future – to poison animals and people in this way, specifically because of the ever-increasing quantities of plastic.

In summary, it is a fact that plastic in the ocean poses a threat to humans and animals alike. Every year, the unwanted left-overs of our civilised throwaway society cost the lives of tens of thousands or marine creatures and make countless people sick. Existing laws which prohibit the disposal of plastic waste in the sea, such as the MARPOL Convention, the EU directive 2009/59/EU and the EU Marine Strategy Framework Directive have still not resulted in any tangible improvement in the situation.

Consequently, privately organised initiatives have to ensure that the oceans get some relief. Garbage collection campaigns such as the annual International Coastal Clean-up day organised by Ocean Conservancy and similar initiatives by other groups, or KIMO International's Fishing for Litter Initiative make enormously important contributions in this regard. Garbage collection initiatives such as these merit recognition and support.

We must ensure that plastic does not end up in the sea in the first place. Every piece of plastic that is collected on land and recycled in whatever form means that it won't end up as garbage in our oceans!

This is what we want to achieve with COPLARE.

http://www.youtube.com/watch?v=XxNqzAHGXvs (Excellent documentary video in English which gives an accurate depiction of the facts mentioned above.)

http://www.mesa.edu.au/seaweek2001/gutful.asp (Documentation on the death of a Bryde's whale caused by plastic. In English.)

http://www.sciencealert.com.au/news/20081403-17043-2.html (Report in English from the University of Queensland on plastic bags being the most frequent cause of death in turtles.)

http://www.kimointernational.org/MicroPlasticResearch.aspx(Joint report in English by KIMO International and the University of Plymouth on the ecological effects of micro plastics.)

http://www.kimointernational.org/FishingforLitter.aspx(Report in English on cooperation with fishermen to fish plastic from the sea.)

COPLARE on Waste and Plastics in Oceania

The article vividly reports about our findings during the crossing of Oceania and leads to the conclusion that we are faced with societies and communities which, due to their resources, their geological conditions, their economic performance, their education and culture, are in all probability not able to handle the waste issue before waste piles destroy the last paradises on earth.

With this article, COPLARE hopes to contribute its share so that the public discussion is steered to the topic of waste management and that the shortcomings in the current practices are identified. We will only be able to attain more recycling as soon as the homework regarding waste management is done. This is what we learned by the crossing of Oceania!